Within the phase of Industry 4.0, it became the most important item on the agenda of industries to install manufacturing lines that meet the constantly evolving and personalized needs in the fastest and most efficient way possible. In this new production viewpoint, the role of robots constantly increases. In this phase which can be described as the digitalization of the industry, transition to digital factories becomes more important for Turkey to increase production power. Stating that it is possible to build tomorrow's digital factories starting today, Mitsubishi Electric Turkey Factory Automation Systems OEM Business Development Senior Manager Mr. Tolga Bizel told us that the brand's answer to Industry 4.0, the digital factory concept e-F@ctory makes it possible to build factories that can meet all the needs of Industry 4.0 and to test production before the factory is built by creating virtual factories before actual installation. Emphasizing that the Cube Enterprise Solution Platform incorporated into e-F@ctory concept is the first step towards digital transformation, Bizel said that this platform provides the necessary data processing between manufacturing department and IT systems.

Beneath the emergence of this new industrial phase called Industry 4.0 or Fourth Industrial Revolution, lies the need to fullfill the needs of humans using automation systems with cyber systems incorporated into them. In this phase which can be described as the digitalization of the industry, robots play increasingly more roles due to the speed and convenience they provide. A global giant in electric, electronic and automation industry, Mitsubishi Electric answers this new industrial phase with its digital factory concept, e-F@ctory and draws attention with its advanced robot technologies which is an important part of this phase. 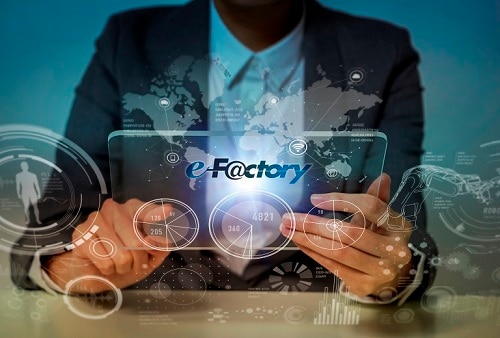 Most important in the agenda of industry is digitalization 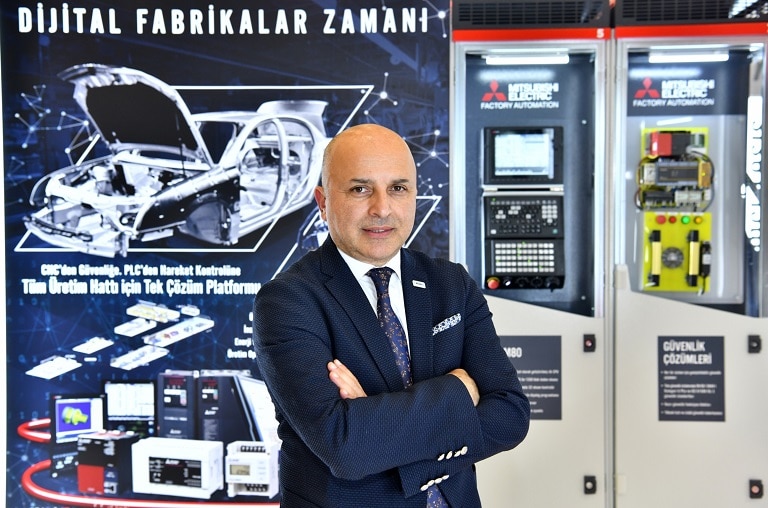 Stating that there is expected to be a huge competition among the biggest 15 countries of global economy in the following 40 years, Mitsubishi Electric Turkey Factory Automation Systems OEM Business Development Senior Manager Tolga Bizel said, "We believe that the element which will determine the top 5 countries in this phase, one of which is expected to be Japan, is expected to be the level of progression in terms of manufacturing personalized products. For such products, fully automated manufacturing systems supported with cyber physical systems, in other words, digital factories need to be developed."

Emphasizing that a brand new industrial revolution phase is starting all around the world, Bizel continued: "Today, it became the most important item on the agenda of industries to install manufacturing lines that meet the constantly evolving and personalized needs in the fastest and most efficient way possible. The ability to adapt the manufacturing line of a company in accordance to the new requirements using a system consisting of robots and machines that can reshape themselves autonomously in the most ergonomic way possible, is the description of the new phase of industry. It is foreseen that countries which can adapt to this new phase with self-adapting manufacturing lines will have a manufacturing sector that can meet the rapidly changing personalized requirements."

Productivity can be measured before manufacturing starts with virtual factories 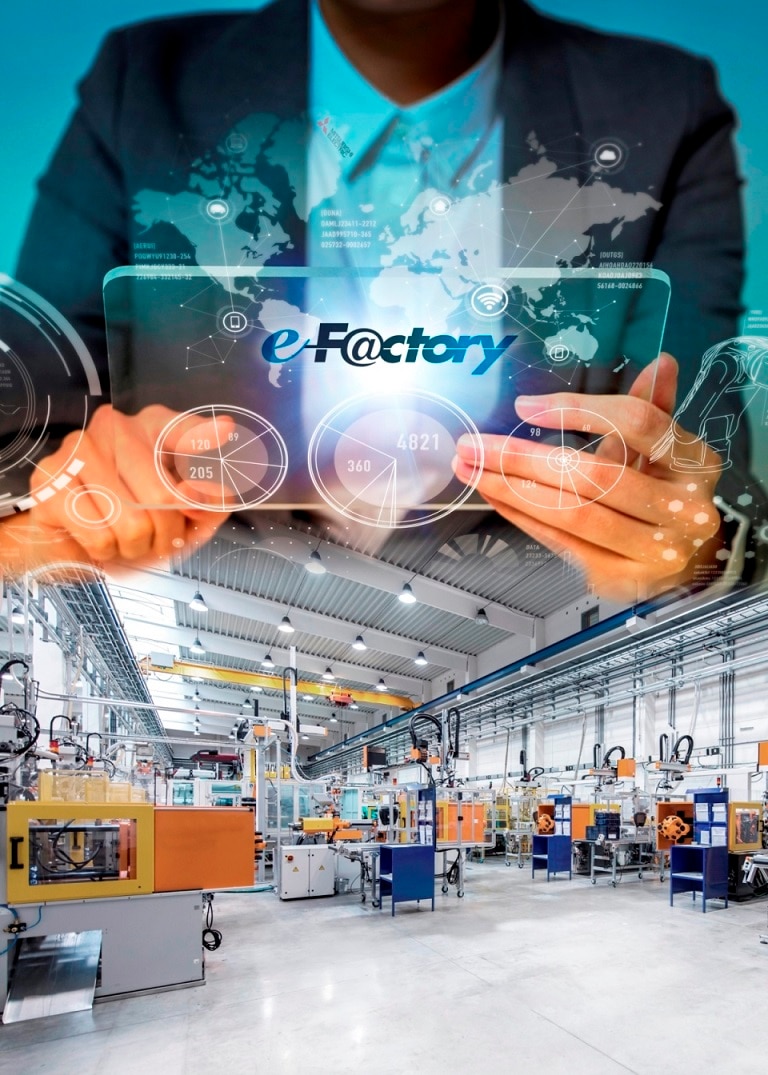 Describing that it is possible to establish the future factories starting today using the e-F@ctory concept, Mitsubishi Electric's answer to Industry 4.0, Bizel informed: "In today's increasingly competitive environment, we must optimize manufacturing in order to meet the demand for personalized products. With the e-F@ctory concept of Mitsubishi Electric, it is possible to build a factory in a way that it can meet all requirements of the new industrial phase and to create a virtual factory before installation. This way, you can run the virtual factory to see your needs and efficiency and shape your investments accordingly. Providing considerable savings on manufacturing costs and used to optimize all layers of factories from management to manufacturing, e-F@ctory helps you get one step ahead in global competition."

Stating that e-F@ctory concept which means digital factory speeds up efficient manufacturing with its rapid connection and short refresh rate, Bizel said that this system which can be monitored online makes it possible to control manufacturing anytime, anywhere. Bizel said, "Thanks to this system which makes it possible to reach all sorts of information necessary for all phases of manufacturing, you can check if there is a fault in the production line if there is a faulty product detected. This can be followed by a decision making process to self-diagnose the problem."

Stating that in factories, it is very important to use and analyze manufacturing data in real time and coordinating such data with IT systems for digital transformation, Bizel said; "At this point Cube Enterprise Solution Platform incorporated into our e-F@ctory as the first step of digital transformation of factories provide necessary data processing between production area and IT system. Collecting production area data while analyzing data in offline mode and processing data for efficient analysis and using analysis results in real-time, this platform makes it possible to reduce preventative maintenance costs and achieve high quality production. Incorporated into Cube Enterprise Solution Platform, the industrial computer MELIPC can perform real time control that cannot be performed with traditional industrial computers. Able to perform high speed, high precision device monitoring and data processing, MELIPC can analyze factory data in real time without the need to move data outside factories. This way, cyber-threats are greatly eliminated. Thanks to the real-time analysis, decisions that must be taken in production lines can be made much more quickly. This system makes it possible to design each factory in accordance with its digital transformation needs."

Reduced cost is a must for competition 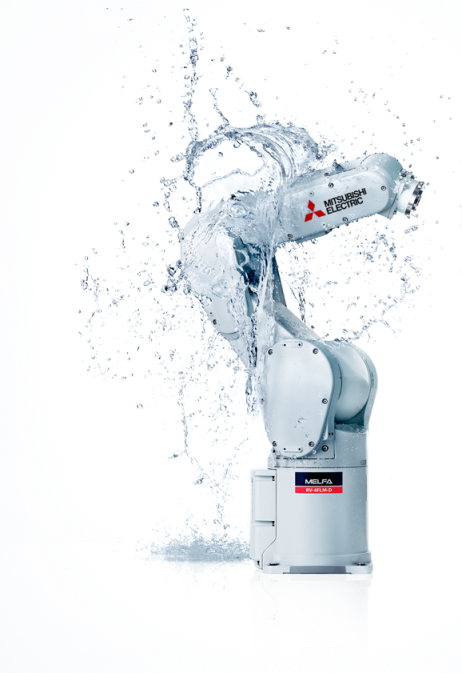 Stating that Turkey is a country with manufacturing capabilities, Bizel said, "For sustainable manufacturing capability one must be able to compete, and in order to compete, production quality must be increased while costs are reduced. Robotic systems shine as the optimal solutions that can provide all these requirements. At this point, as Mitsubishi Electric we stand out with our robots that can work with precision close to that of a human hand and arm in numerous sectors such as automotive, pharmaceuticals, electronics, white appliances, food, packaging and education. Thanks to Mitsubishi Electric's digital factory technology e-F@ctory, robots can communicate with other products on production lines. Because in e-F@ctory concept, all products that make up the factory automation work integrated to one another with open architecture. This way, optimizing production lines according to personal demands and adapting to competitive environment in the market becomes easier than ever."